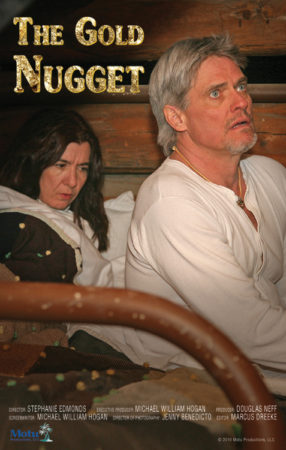 GENRE: Horror
TYPE: Short Film
LOGLINE: Evil lurks in the form of a gold nugget that makes its way through time hanging around the necks of unsuspecting victims.
RUNNING TIME: 14:49
RATED: PG-13
WATCH>>

Out checking his traps on a cold winter day, Caleb—an 1800’s homesteader—discovers the body of a prospector frozen in the ice alongside a river. Sent back by his wife to recover the body for a proper burial, Caleb finds a large gold nugget strung around the neck of the corpse. He claims the nugget as his own, awakening a curse that will bring a visitor to his tiny log cabin later that night.

Fast-forward to present day when a mountain rancher accompanies his family on a springtime horseback ride along that same river. Two semi-frozen bodies are discovered, leading to a new claim on the nugget, and new victims for its curse.