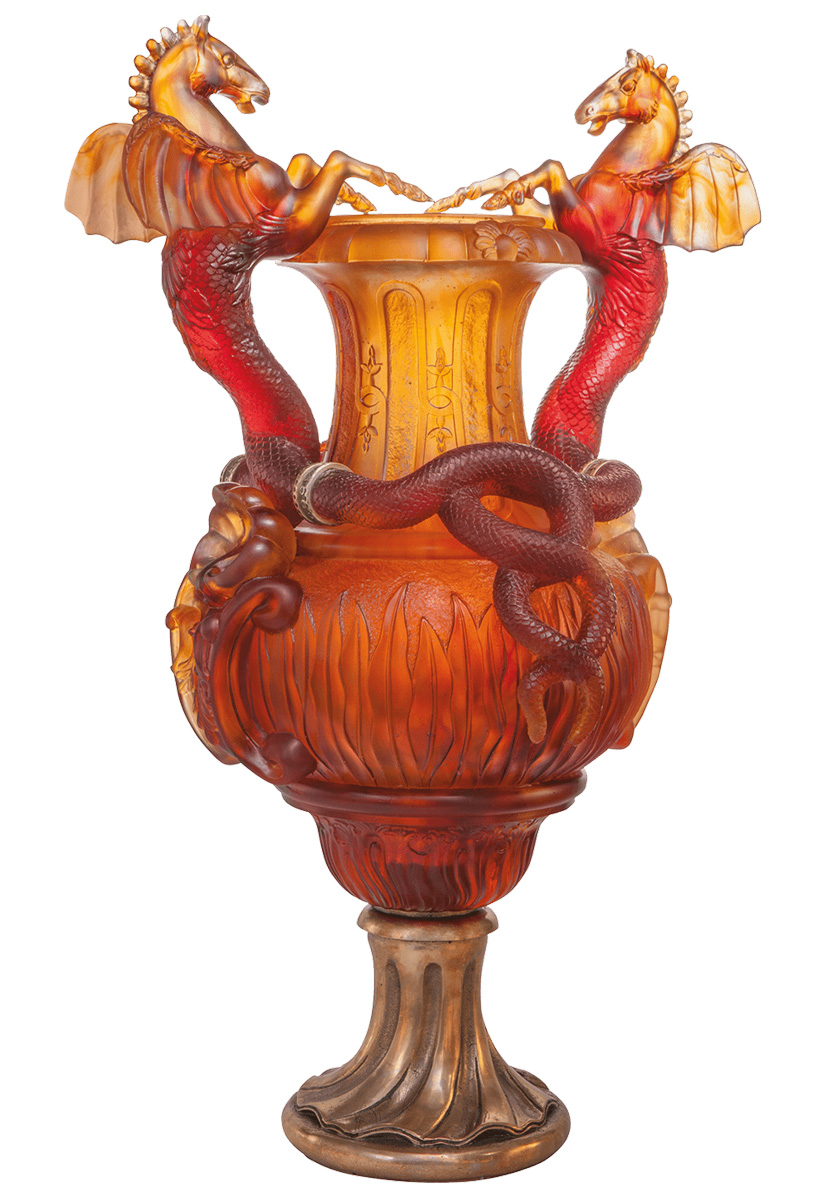 “Dearest, would this be of interest to you?”

Maddie entered the doorway and crossed her husband’s study as excitedly as her 84 years and two arthritic hips could carry her. She shakily thrust an auction catalog in front of Leo’s face. In typical fashion, his response was less than enthusiastic.

“It’s a Daum Crystal Amber Stanislas,” Maddie piped. “I know, I know…you prefer bronze over crystal, but the flaming orange and red hues in this piece are amazing!”

Maddie held the catalog a few seconds longer, but Leo wasn’t buying it. She snatched it to her substantial bosom and glared at him.

“Do you know what tomorrow is?” Maddie quizzed. Not waiting for an answer, she turned and waddled toward the doorway. Slowing to glance back over her shoulder, tears had formed in her eyes.

Leo’s expression remained unchanged. Maddie gathered herself and tossed the catalog atop a pile of others as she exited the room. Leo just stared.

A short while late, Maddie returned to the room carrying a large silver Chantilly-Grand serving tray. She and Leo had acquired the tray for a $9,500.00 steal at a Sotheby’s auction some thirty years ago. The tray was now adorned with a Meissen porcelain antique tea set and a generous plate of shortbread cookies.

“Am I disturbing you, Dearest?”

Leo’s mood had not improved. Ignoring that fact, Maddie cheerfully placed the tray atop the Protacini alligator skin desk mat in front of Leo. She then proceeded to pour two cups of steaming tea.

“There’s no good time to have this conversation, but we must have it.”

Maddie lowered her bulk onto a mahogany Duncan Phyfe side chair across the desk from Leo. He displayed no appreciation for the tea, or the cookies.

“We cannot continue on this way, Dearest,” Maddie whispered. “We must make a decision.”

Maddie allowed Leo time to reply by stuffing two shortbreads into her mouth and washing them down with half a cup of tea. Finally accepting that no cooperation would be forthcoming from her husband, she continued.

“We’ve been searching for three weeks, Dearest…three weeks!” she exclaimed. “I agree that we seek something extraordinary, something special with a lasting quality, but I am at my wits end. I’ve presented dozens of exceptional specimens to you. Nothing has been good enough for you!”

Leo simply sat there, staring at Maddie, not moving a muscle.

Maddie raised her teacup to her lips, but her expression suddenly changed. Immense anger rose up on her face and she hurled the cup across the room, where it’s value depreciated to zero in one hundred tiny pieces. Defying her size and many ailments, she rose to her feet and leaned across the desk.

“Goddammit!” she screamed. “You stink!”

“You’re bloated! Your eyes are glazed over! Your skin is gray! And you fucking stink, Leo!”

Maddie took several slow steps toward the doorway before turning back.

“I am going to the auction this evening,” she announced, her voice once again controlled.

“I intend to bid on that Daum Crystal Amber Stanislas urn, Dearest. I’m quite fond of that one and…” She hesitated, wiping away tears as she stared back at her dead husband.

“It’s not as if I didn’t provide ample opportunity for you to choose something else to hold your ashes.”

Maddie turned her back on Leo and exited the study.