Sebastian and the Invisible Island By Michael William Hogan 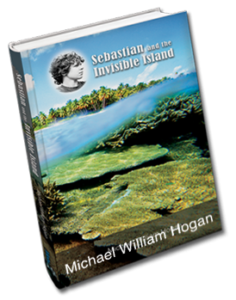 An adventure story for middle grade to young adult readers.

BRIEF SYNOPSIS: Sebastian Youngfield is sailing the world with his parents when their voyage takes a dramatic turn in the South Pacific. A massive storm blows in, leaving Sebastian adrift at sea alone in a small dinghy. Days later, he wakes to the sight of a strange green pelican and an island that alternately appears and disappears.

It’s not long before Sebastian discovers he’s a castaway, thrown into an extraterrestrial battle between good and evil. To survive the adventures, he must cast fear into the depths and summon every skill learned in his young life. And even that may not be enough to overcome the otherworldly dangers that reside on the island.

You can purchase Sebastian and the Invisible Island at Amazon.com in paperback and Kindle editions.

Herds of Birds and Flocks of Fish By Michael William Hogan 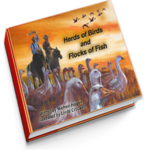 Herds of Birds and Flocks of Fish is a fun picture book that helps young children learn the proper names for selected groups of  birds and animals.

STATUS: “Herds of Birds and Flocks of Fish” is a finished manuscript that has been edited and critiqued by professional editors. Illustrations were created by Linda Crockett and full rights to these are owned by Michael William Hogan.

Following are two samples of the 17 two-page spreads in the book:

An audio interpretation of Herds of Birds and Flocks of Fish can be seen here.