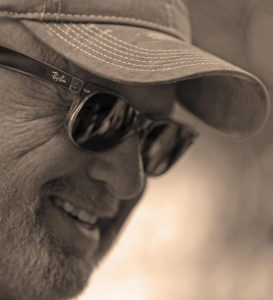 Born and raised in Michigan, Michael W. Hogan eventually loaded up his covered wagon and ventured to Colorado, before completing his migration west and planting stakes an eight-lane freeway south of Hollywood. While work as a marketing executive was the driving force behind his moves, the final proximity to the heart of the entertainment industry proved serendipitous.

An award-winning closet copywriter (the boss isn’t supposed to be writing copy), Michael escaped the corporate world in 2002; and in 2005 partook of a serious pursuit to write movies. He optioned his very first feature screenplay and from there the words—and rewrites and polishing—continued to flow. Mucho accolades followed, but nothing was getting produced.

Succumbing to his growing impatience, Michael wrote, directed and produced his first short film in 2008. Nestled in the horror genre, “The Gold Nugget” was shot at various mountain locations in Colorado and included child actors on horseback, a vintage 1865 log cabin, and the need for both winter/snowy weather and sunny springtime conditions. Needless to say, some lessons learned from that one. In the end, though, “The Gold Nugget” became a cult classic…among the film’s actors, crew and a few family members with questionable taste.

Michael followed up “Nugget”, with two more horror shorts, “Room Service” and “Just a Nibble” in 2010. Planned for inclusion in a “Hotel Horrors” anthology of single location short films, the two new products were shot in California. Each received legitimate acclaim on the film festival circuit domestically and abroad.

A serious family health crisis pulled Michael away from screenwriting from 2012 until mid-year 2019. Firmly settled back in the saddle, he completed and set about polishing a new sci-fi/comedy feature script, “Benny B”. Initial coverage and competition results are very favorable for “Benny” and Michael is well along on his next feature projects.

He looks forward to connecting with other writers, filmmakers, producers, executives (and managers, agents and financiers) at festivals and other events in 2020.