The Near Death Experience of Dr. John Dantry 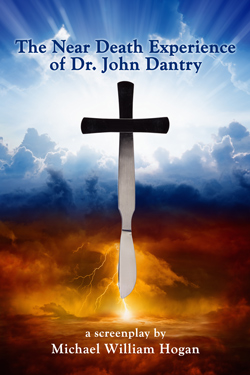 Logline:  A narcissistic heart surgeon's atypical near-death experience lands him in hell and ultimately transforms him from saver of mortal lives to saver of lives eternal.

Brief Synopsis: Dr. John Dantry is an excellent heart surgeon; one of the best. He’s well respected for his skill in the operating room. He makes his living saving lives. But when he belittles an elderly patient about her Heavenly near-death experience, insisting she accept a scientific explanation, John’s life takes a rapid downward turn. His elderly mother succumbs to cancer; then he and girlfriend, Deanna, suffer a horrific car accident on the way home from the funeral. The accident kills Deanna and leaves John with an injury that may end his career as a surgeon—a mangled hand. John’s anger spills over in his hospital room triggering heart failure…and his descent into hell.

Awakening in the bowels of the earth, John soon experiences hell as advertised; hot, dry and a place where teams of huge demons are drawn to the agonized screams of pain and anguish from the eternally lost; dropping down on them to inflict horrific abuse on their bloodless bodies. John soon meets Cynthia Brody, another recent arrival. Cynthia readily accepts the reality of her fate. In John, however, she senses and chooses to believe that he and he alone may be suffering a darker form of near-death experience. Motivating Cynthia’s desire to believe that John’s dissension into hell is temporary is the unsaved family she has left behind; a materialistic husband and two spoiled and unappreciative teenagers. Through John, she hopes she can send a message back before it is too late for her loved ones.

The permanency of Cynthia’s fate is soon confirmed and John is faced with his own reality when he encounters loved ones from both his distant and recent past. An unexpected encounter changes his course, however, and he awakens back in the hospital where he vows to change his ways and make amends for his past behavior. He also seeks to fulfill Cynthia’s pleading that he reach out to her family before they, too, suffer her fate.