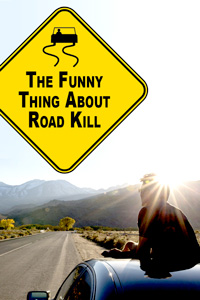 Logline: Close and crazy encounters with road kill give a film school dropout the guts to achieve his dreams on his terms.

Brief Synopsis: “The Funny Thing About Road Kill” is a 90-page comedy that elevates road kill from pile of goo on the pavement to the unexpected answer to world hunger. Well, sort of…

“The Funny Thing About Road Kill” weaves a tale about Josh Carletti, an unemployed film school dropout and YouTube sensation. Josh loves making movies and the fact that his father heads one of the big six studios in Hollywood should make life easy.

But his independent nature instead lands him a gig producing a court-mandated documentary film about road kill. Josh enlists his roommate Stewart to help him with his film and Stewart, in turn, convinces pretty coffee shop barista Katie to join them as a production assistant. The trio set off on a road trip adventure that gives Josh a new perspective on road kill… and his career.