Sebastian and the Invisible Island 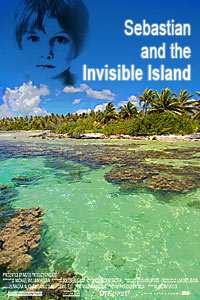 Logline: A young castaway’s only hope for rescue comes in the form of the feuding extra-terrestrials occupying his atoll.

Brief Synopsis: Sebastian Linus Youngfield is sailing the world with his parents when their voyage takes a dramatic turn in the South Pacific. A massive storm blows in leaving Sebastian adrift at sea in a small dinghy. To survive the adventures ahead, he must cast fear into the depths and summon every skill learned in his young life.

Following several days adrift at sea, Sebastian makes it safely ashore a small island. But he’s not alone. Soon after befriending a flock of strange florescent green pelicans, Sebastian is forced to seek shelter and safety inside a buried spacecraft. There he discovers that the strange birds are actually Dorrgroos, an alien species from another galaxy. The friendly Dorrgroos can morph into the forms of other living creatures. But so can the Zeppendulars; an evil species of alien that occupy the larger island across the lagoon.

The feuding species of aliens have been stranded on the atoll following the crash of both of their space ships eons ago. But now the Zeppendulars have managed to uncover and repair their ship and are getting close to leaving with the only means to get back home. To make matters worse, the ‘Zepps’ have placed a cloak around the entire atoll that renders it invisible from the air or sea. The Dorrgroos survival, Sebastian’s rescue and the future of the planet earth may all rest in Sebastian’s ability to develop and execute a plan to hijack the Zeppendular’s space ship.

Sebastian and the Dorrgroos enlist the help of a young woman named Amelia, a Polynesian warrior and other earthly creatures once held captive as morphing patterns. While the Zeppendulars are confined to their ship during a rain storm, the war party crosses the lagoon and sets up an ambush outside the Zepps’ spacecraft. When the sun returns and the evil aliens exit the ship to soak up the sun’s rays, a chaotic battle erupts. All goes well for the Dorrgroos until Amelia is captured and Sebastian is left to singlehandedly save the day.