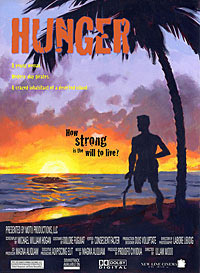 Logline: Set adrift by modern-day pirates, a young woman faces the crazed occupant of a deserted island...and the ultimate taboo.

Brief Synopsis: Hunger is a story about Sarah Drake, a young woman who survives an attack by modern-day pirates, only to be saved by the psychotic occupant of a deserted island whose morality has been pushed to the edge by drugs and hunger. Sarah assumes her husband Alex was killed in the pirate attack. And she is unaware that Myles, a friend and one-time lover is searching for her. She is nursed back to health by amputee Prescott, thanks mostly to his frequently-served meal of “sea iguana”. If Sarah is to survive, horrific choices must be made and in the twisted end, those choices become a shocking testament to love and the will to live.