Bye Cuspid! The Adventures of a Male Tooth Fairy 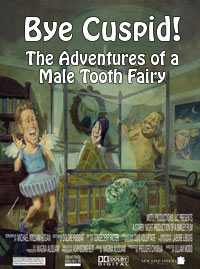 Logline: Bent on retirement, the elderly Tooth Fairy passes her wand to her adult son—a naïve and reluctant janitor at the Tooth Castle.

Brief Synopsis: As an only child, Cuspid grew to adulthood in the Tooth Castle, quite content with his job as a janitor; brushing and polishing the millions of tiny teeth that cover the walls. Then one day his mother, the Tooth Fairy, decides it’s time to retire. Tradition dictates that she pass on her magic wand only to family, so the beautiful Tippy—who happens to be smitten with Cuspid anyway—is enlisted to join a risky plot to transform the naïve Cuspid into a family man. But soon after Cuspid reluctantly dons his tights and tutu, complications arise that jeopardize a young brother and sister…and everyone in the Tooth Castle. Cuspid must then convince Tippy to join him in the outside world and, with help from the Boogie Man and the Sand Man they launch “Operation Orphans” to save the children and secure the purpose and future of the residents of the Tooth Castle.